"The human 'supervising driver' in a self-driving Uber is just a meat-based liability magnet."

An Arizona prosecutor has brought charges of negligent homicide against the first human driver to fail to prevent an imperfect "self-driving" vehicle from killing a pedestrian. [...]

It was later revealed that Uber's technology didn't have "the capability to classify an object as a pedestrian unless that object was near a crosswalk," either -- functionally condemning "jaywalkers," who endanger no one but themselves, to a swift and violent death for their crime. [...]

Perhaps even more disturbing than Uber's tech failures, though, is the fact that the company had actually disabled the automatic emergency braking functions of the vehicle [...] and relied instead on Vasquez to take notice of the walker and stop the car. However, the system was not set up to actually alert the driver of a possible human being in the road, because Uber had deactivated the forward collision warning technology, too. [...]

"The fact that this driver has been charged with a crime does not vindicate Uber in any way," said Bryant Walker Smith, a lawyer, engineer, and internationally recognized expert in autonomous vehicles. "For me, this crash comes down to a vicious cycle: The driver falsely assumed that Uber's software would be vigilant, and the designers of that software falsely assumed that the driver would be vigilant. ... I would argue that the companies that develop and deploy these vehicles are driving them -- conceptually and morally, even if not legally." [...]

Perhaps the most unusual thing about the death of Elaine Herzberg is that the driver who killed her has been charged with a crime. That's so rare that there's virtually no national data on how many drivers who strike pedestrians face legal consequences; one investigation found, for example, that less than 1 percent of Minneapolis drivers who struck walkers between 2010 and 2014 were tried.

As I said before:

So of course they're going to throw their lowest-level Uber employee "non-employee independent contractor" under the bus. But it's Travis Kalanick who should be in jail.

And as I said before that:

USPS had a plan to send 5 reusable facemarks to every household in early April. by jwz
Thursday September 17th, 2020 at 1:41 PM

The White House blocked the plan.

At one point in April, USPS leaders drafted a news release announcing plans to distribute 650 million masks nationwide, enough to offer five face coverings to every American household. The document, which includes quotations from top USPS officials and other specifics, was never sent. [...]

Before the news release was sent, however, the White House nixed the plan, according to senior administration officials, who spoke on the condition of anonymity to share internal deliberations. Instead, HHS created Project America Strong, a $675 million effort to distribute "reusable cotton face masks to critical infrastructure sectors, companies, healthcare facilities, and faith-based and community organizations across the country." About 600 million of the 650 million masks ordered have been distributed, according to an HHS spokesperson, including 125 million set aside for schools.

"There was concern from some in the White House Domestic Policy Council and the office of the vice president that households receiving masks might create concern or panic," one administration official said in response to the scrapped mask plan.

Microsoft declares its underwater data center test was a success by Jim Salter
Wednesday September 16th, 2020 at 8:27 AM

Project Natick has been underway for several years; we covered the two-month trial deployment of Leona Philpot, the company's first underwater server pod, in 2016, and the deployment of the newly retrieved Orkney Isles pod in 2018.

The potential disadvantage of sealed underwater "data centers" is obvious—they must be extremely reliable, since they can't be serviced on a regular basis. There is a somewhat less intuitive, counterbalancing advantage, of course—they don't have any pesky humans wandering around inside them, potentially dislodging cables, unplugging things, or otherwise injecting chaos.

There are more advantages to these miniature underwater data centers. Seafloor-based pods don't require expensive commercial real estate, and they get nearly free cooling from the surrounding tons of seawater.

The logistic advantage may be even more important than the cooling or immediate financial one. It takes significant time and specialized effort to acquire and develop commercial real estate for a traditional data center in a major city—building a sealed pod and deploying it on the seafloor nearby should be considerably simpler and faster.

The Northern Isles underwater data center pod was built by Naval Group (a defense and renewable marine energy contractor) and is locally supported by Green Marine, an Orkney Island-based marine engineering and operations firm. It spent two years beneath the water at the European Marine Energy Centre, where tidal currents peak at 9mph and storm waves reach 60 feet or more.

Both deployment and retrieval of the Northern Isles needed particularly calm weather and a full day of careful work involving robots and winches between the pontoons of a gantry barge. In the course of the pod's two years underwater, it acquired a coating of algae and barnacles, as well as cantaloupe-sized sea anemones colonizing sheltered nooks in its base. 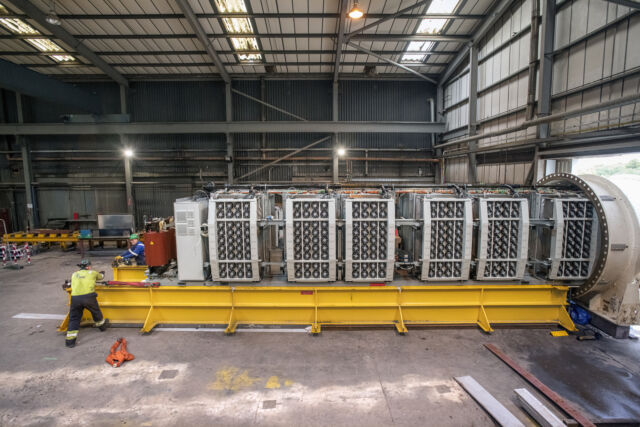 The entire 12-rack, 864-server data center is slid from the hull of the Northern Isles as a unit, after preliminary in situ analysis. (credit: Jonathan Banks)

Before sliding the 12-rack, 864-server data center unit out of the pod's hull, Microsoft's researchers took internal air samples from the still-sealed pod for analysis in Redmond. "We left it filled with dry nitrogen, so the environment is pretty benign in there," Microsoft Special Projects researcher Spencer Fowers said. Analysis of the air after the two-year deployment will give the team additional information about cable and other equipment outgassing.

The servers deployed aboard the Northern Isles failed at a rate approximately one-eighth what experts would expect from the same servers in a traditional, human-serviced data center over the same period. Microsoft's team hypothesizes that this is partly due to the sealed, inert nitrogen atmosphere the pod was pressurized with before deployment.

Without any oxygen for human technicians to breathe or excessive humidity for their comfort, there are fewer opportunities for chemical corruption of components. Lack of bumping and jostling by those same human operators likely also contributed to the servers' unusually low failure rate. 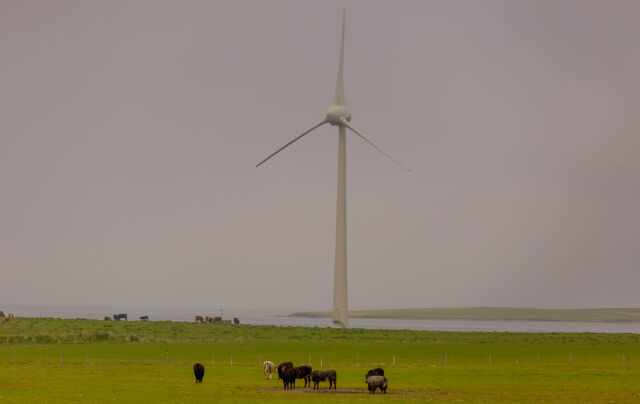 Windmills like this one provide 100 percent of the electricity grid which services residents of the Orkney Islands—a cable from that grid also supplied power to the Northern Isles, in addition to tidal turbines and wave energy converters. (credit: Scott Eklund)

The successful two-year deployment of the Northern Isles demonstrates the feasibility of greener, more sustainable power initiatives for data centers, above and beyond the efficiency of cooling the data center itself.

One reason the Project Natick team deployed the Northern Isles to the Orkney Islands is because its grid is supplied 100 percent by wind, solar, and experimental green technologies under development at the European Marine Energy Centre itself. "We have been able to run really well on what most land-based data centers consider an unreliable grid," Fowers said.

Ben Cutler, a project manager for Project Natick, believes that co-located offshore wind farms could viably power production deployments similar to the Northern Isles. Even light wind conditions would likely be enough to power the pods, with a shore powerline bundled in with the pod's fiber-optic data cabling as a last resort. Cutler also notes that the seawater cooling for such deployments isn't just cheaper than traditional cooling—it leaves freshwater resources vital to humans and wildlife untapped.

The crash occurred after dark on a well-lit stretch of Mill Avenue. Herzberg was crossing the multilane road when the Uber SUV struck her at 38 miles per hour. Footage from a driver-facing camera shows Vasquez looking down at her lap for more than five seconds just prior to the crash. Officials found that Vasquez had been streaming a reality show called The Voice to her phone just before the crash.

Vasquez is being charged with negligent homicide, a charge similar to manslaughter that carries a recommended sentence of 2.5 years. However, the grand jury also charged that the crime was committed with a "dangerous instrument"—namely the car. When negligent homicide is committed with a dangerous weapon or instrument, the recommended sentence increases six years.

"Distracted driving is an issue of great importance in our community," a Maricopa County attorney said in a press release. "When a driver gets behind the wheel of a car, they have a responsibility to control and operate that vehicle safely and in a law-abiding manner."

The grand jury formally approved the charges in August, and Vasquez was arraigned on Tuesday. She was freed pending trial with an ankle monitoring device.

Senior Uber managers were warned about problems with its self-driving technology in the months before the Herzberg crash. Indeed, one departing Uber engineer sent a scathing email to the head of the self-driving program days before Herzberg's death.

"A car was damaged nearly every other day in February," Miller wrote. "We shouldn't be hitting things every 15,000 miles."

Miller pointed to an incident the previous week (nine days before Herzberg's death) when an Uber test vehicle "drove on the sidewalk for several meters."

"At Waymo I would not have been surprised if the entire fleet was immediately grounded for weeks or longer if a vehicle exhibited the same behavior," Miller wrote. Instead, he reported, the incident "was essentially ignored" until Miller brought it to the attention of management.

But Uber escaped criminal liability for the crash.

"After a very thorough review of all evidence presented, this office has determined that there is no basis for criminal liability for the Uber corporation," a prosecutor wrote.

Uber struck a quick settlement with Herzberg's heirs. But the crash shattered Uber's fledgling self-driving technology program. Uber shut the program down for months and permanently ended testing in Arizona. Nine months after the crash, Uber finally resumed testing on a much smaller scale in Pittsburgh.

rascalking
reply
Every c-level exec at the time should be serving as much time in prison as the driver does.
Wakefield, MA

In 2002, Berkeley UCPD made trading cards for their officers so students could get to know their cops. It's been a while, so we updated the initiative.

"Sgt Andrew Tucker, who hospitalized four students in 2011. Maybe they asked for it, though: Chancellor Robert Birgeneau called the protestors "not non-violent" because they'd linked their arms together."

"Barry Boersma, who killed a man with a carotid hold and shot another in the back with a Taser while working for Vallejo PD."

"Berkeley UCPD Sgt. Billy Brashear, the cops' student body liaison. In 2011, Brashear liaisoned with students' bodies by beating them with a baton, even though one had already fallen to the ground."